From Wikipedia, the free encyclopedia
Jump to navigation Jump to search
For other uses, see Goma (disambiguation).
Provincial capital and city in North Kivu, DR Congo

Goma is the capital of North Kivu province in the eastern Democratic Republic of the Congo. It is located on the northern shore of Lake Kivu, next to the Rwandan city of Gisenyi. The lake and the two cities are in the Albertine Rift, the western branch of the East African Rift system. Goma lies only 13–18 km (8.1–11.2 mi) south of the active Nyiragongo Volcano. The recent history of Goma has been dominated by the volcano and the Rwandan genocide of 1994, which in turn fuelled the First and Second Congo Wars. The aftermath of these events was still having effects on the city and its surroundings in 2010. The city was captured by rebels of the March 23 Movement during the M23 rebellion in late 2012, but has since been retaken by government forces.

The Rwandan genocide of 1994 was perpetrated by the provisional Rwandan government on the Tutsi population and Hutu moderates. In response the Rwandan Patriotic Front (RPF), formed by Tutsi refugees in Uganda, which already controlled large areas of northern Rwanda following its 1990 invasion and the ongoing Civil War, overthrew the Hutu government in Kigali and forced it out. One of the many UN missions attempted to provide a safe zone in the volatile situation and provided safe passage for the refugees. From 13 June to 14 July 1994, 10,000 to 12,000 refugees per day crossed the border to Goma. The massive influx created a severe humanitarian crisis,[3] as there was an acute lack of shelter, food and water. However, the Zaïrean government took it upon itself to garner attention for the situation. Shortly after the arrival of nearly one million refugees,[4] a deadly cholera outbreak claimed thousands of lives in the Hutu refugee camps around Goma. RPF aligned forces, mainly actors in the conflict, crossed the border and in acts of revenge also claimed several lives.

Hutu militias and members of the Hutu provisional government were among the refugees, and they set up operations from the camps around Goma attacking ethnic Tutsis in the Kivus and Rwandan government forces at the border. For political reasons the Kinshasa government of the then Zaire led by Joseph Mobutu did not prevent the attacks, and so the Rwandan government and its Ugandan allies threw their support behind the Alliance of Democratic Forces for the Liberation of Zaire, a rebel movement led by Laurent Kabila against Mobutu. Rwandan forces stormed the camps at Goma, resulting in thousands of additional deaths, and with their help and that of Uganda, Kabila went on to overthrow Mobutu's regime in the First Congo War, which ended in 1997.

Within a year Kabila had quarrelled with his former allies, and in 1998 the Rwandan government backed a Goma-based rebel movement against Kabila, the Congolese Rally for Democracy (RCD, sometimes called RCD-Goma) made of Banyamulenge people, related to the Tutsis. They captured Bukavu and other towns, and the Second Congo War began. The Goma refugee camps, in which the Hutu had created a militia called the FDLR (Democratic Force for the Liberation of Rwanda), were again attacked by Rwandan government forces and the RCD.

The Second Congo War was unprecedented in Africa for the loss of civilian life in massacres and atrocities. By 2003 the Banyamulenge had become tired of the war and friction emerged between them and Rwanda. In 2002 and 2003 a fragile negotiated peace emerged between the many sides involved in the war.

Conflict since the end of the war[edit] 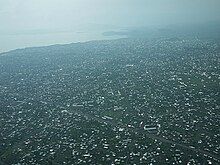 Aerial view of Goma in October 2010

There have been numerous outbreaks of violence since 2003. The Hutu FDLR remains in the forests and mountains north and west of Goma, carrying out attacks on the Rwandan border and on the Banyamulenge. The Congolese defence forces are unable or unwilling to stop them, and as a consequence Rwanda continues to support Banyamulenge rebels such as the RCD and General Nkunda, and to carry out incursions into North Kivu in pursuit of the FDLR.[5]

In September 2007 large-scale fighting threatened to break out again as the 8,000-strong militia of General Nkunda, based around Rutshuru, broke away from integration with the Congolese army and began attacking them in the town of Masisi north-west of Goma. MONUC (United Nations Mission in the Democratic Republic of Congo) began airlifting Congolese troops into Goma and transferring them by helicopter from Goma International Airport to Masisi.[5]

On October 27, 2008, the Battle of Goma broke out in the city between the Congolese army, supported by MONUC, and Nkunda's CNDP rebels; 200,000 refugees fled the town.[6] On 3 November 2012 there was a clash between Congolese and Rwandan troops on the border just north of Goma. Goma was later seized by the M23 movement on November 20, 2012.[7] "Tens of thousands" of civilians fled the area.[8] In August 2019, Health Minister Diane Gashumba of Rwanda stated that students will stop going to school in Goma, a city in the Democratic Republic of Congo that is close to border over Ebola fears.[9]

The Italian ambassador to the Democratic Republic of the Congo, Luca Attanasio, 43, was killed in an apparent kidnapping attempt near Virunga National Park. He was part of the U.N.'s World Food Programme (WFP). Two others were also killed.[10]

Goma is represented in the National Assembly by five deputies/Representatives:

The Great Rift Valley is being pulled apart, leading to earthquakes and the formation of volcanoes in the area.

Computer image of Nyiragongo volcano generated from satellite photographs, showing the Goma-Gisenyi conurbation on the lake shore in the foreground. In the background, left, is the Nyamuragira volcano. Note that the vertical scale has been exaggerated.

In January 2002, Nyiragongo erupted, sending a stream of lava 200 metres (219 yd) to one kilometre (1,100 yards) wide and up to two metres (6½ ft) deep through the center of the city as far as the lake shore. Agencies monitoring the volcano were able to give a warning and most of the population of Goma evacuated to Gisenyi. The lava destroyed 40% of the city (more than 4,500 houses and buildings). There were some fatalities caused by the lava and by emissions of carbon dioxide, which causes asphyxiation. The lava also covered over the northern 1 km of the 3-kilometre (9,800 ft) runway of Goma International Airport, isolating the terminal and apron which were at that end.[15] The lava can easily be seen in satellite photographs,[16] and aircraft can be seen using the 2-km (6,500-ft) southern section of the runway which is clear of lava.

Currently the scientists at Goma are monitoring Nyiragongo.

Lake Kivu is one of three lakes in Africa identified as having huge quantities of dissolved gas held at pressure in its depths. The other two, Cameroon's Lake Monoun and Lake Nyos, experienced limnic eruptions or 'lake overturns', catastrophic releases of suffocating carbon dioxide probably triggered by landslides. Lake Nyos's overturn in 1986 was particularly lethal, killing nearly two thousand people in the area around the lake. Kivu is 2,000 times bigger than Lake Nyos and also contains dissolved methane as an additional hazard – though concentration of carbon dioxide is much lower than in Lake Nyos.[17] Nearly two million people, including the population of Goma, live in the vicinity of Lake Kivu and could be in danger from a limnic eruption triggered by one of the nearby volcanoes and the earthquakes associated with them.[18]

The phenomenon known locally as 'mazuku' has killed children even more recently.[19]

Goma International Airport provides domestic flights and, as of 2016, one international flight (Ethiopian Airlines). The city lies on the Rwandan border and neighboring Gisenyi is connected to Kigali, the Rwandan capital, by road and regular buses travel between these cities in under four hours. Goma is connected to Bukavu by ferries, to Butembo, Beni, Bunia and Kisangani either by domestic flights or by road, and regular buses travel from Goma to these cities. It takes one to two days of travel (by bus) to arrive in those cities.

Köppen-Geiger climate classification system classifies Goma’s climate as a tropical savanna climate (Aw).[20] Goma is much milder than most climates of its type due to the city’s high altitude, and sees very warm days and pleasant nights year-round.